Anyone who has worked in logistics and had to explain a situation in the field has probably been frustrated by the way their phone’s autocorrect changes the word “pallets” to “palates” or “palettes.” The shipping pallet just isn’t discussed or appreciated by the average consumer. But just as important as pallets–and just as unheralded–is what they allow manufacturers, distributors, and warehouses to do: palletize products. So, what is palletizing?

Palletizing or palletization most often refers to the act of placing products on a pallet for shipment or storage in logistics supply chains. Ideally, products are stacked in a pattern that maximizes the amount of product in the load by weight and volume while being stable enough to prevent products from shifting, toppling, or crushing each other. Traditionally, palletizing was accomplished by manual labor, but increasingly automated systems are taking over the task of palletizing products.

Palletizing Your Products for Safe and Stable Pallets

By palletizing your products, you are, in effect, converting multiple smaller products into a single load that can be moved as one unit. The goal is to prevent motion among the smaller units that make up a palletized load, since a shift in a single carton at the base of the pallet can cause the whole load to topple, potentially resulting in product damage or personal injury. You can reduce product damage during transportation by following some basic rules:

Many products fit neatly into standard-sized boxes, which makes palletizing them easy. Long or awkwardly shaped products may not be palletized so neatly. If these are highly customized single-lot items like machine tools or fabricated frames for industrial equipment, then strapping them down tightly to the pallet and padding them may be acceptable. When high volumes of products like these are being shipped routinely, customized cardboard containers are the best bet for reliably palletizing them and ensuring their safe arrival.

In industries in which the products are highly standardized, such as the beverage industry, robotic palletizers have become a proven technology over the last few decades. Automated palletizers can easily handle repetitive work and free up employees for tasks that require on-the-spot thinking. 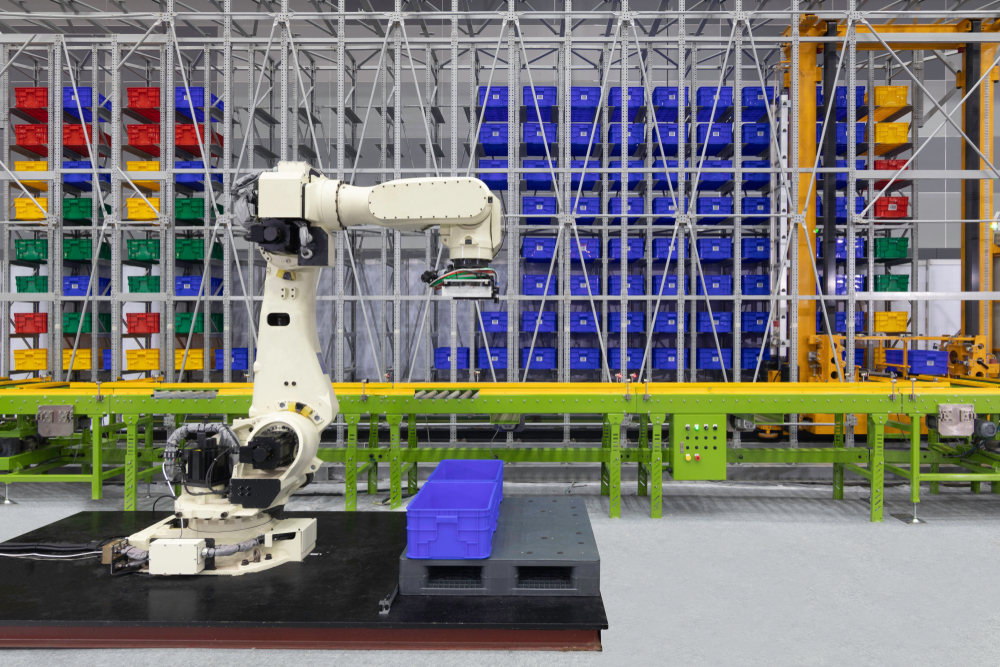 Automated palletizing was developed in the 1970s and used a combination of conveyor belts and industrial sorting equipment to arrange standardized containers into preset patterns. To stack products, each container layer was clamped into place and lifted off the conveyor belt and onto the pallet. In order to alternate the stacking pattern, the entire pallet was rotated before the next layer went into place. The system was a rather impressive demonstration of engineering ability in a world that was still entirely analog. This type of palletizer is called an inline palletizer and a version of it is still used in many supply chains.

Robotic palletizers have developed to the point where they can palletize several different types of products on one pallet.

A decade later, in the 1980s, articulated robot arms similar to those used in automotive manufacturing were introduced in palletizing. They have the advantage of being able to handle packages or products individually, bringing greater flexibility to automated palletizing. A robot arm can be programmed to handle different-sized packages or arrange them in different ways without substantially changing the physical equipment needed to do the job. In fact, robotic palletizers have developed to the point where they can palletize several different types of products on one pallet. An inline palletizer, on the other hand, may need to divert products onto an entirely different line in order to change the layer pattern. Of the two types of automatic palletizers, an inline palletizer is generally quicker and works well with high volumes of a single type of goods, such as canned goods. However, an inline palletizer doesn’t work as well for manufacturers producing many different types of goods at the same location. As many manufacturing and logistics systems are switching to an omnichannel model—in which a single production line and supply chain handle many types of products—it is becoming common for manufacturers to use both types of palletizer in one facility. For instance, an inline palletizer may have a robotic arm next to it to take over when atypical products are being palletized. This enables the speedy handling of high volumes of goods as well as the efficient palletization of specialty loads.

A durable shipping platform with less variability in weight and dimension can reduce palletizing errors and interruptions.

Whether you choose a robotic or inline system, getting the most out of an automated palletizer requires consistency. Packages must have precisely the right dimension and weight in order for the conveyor’s belts to position them correctly. A package with a weight or shape that varies from the others can throw the pattern created by a robotic arm out of alignment.

While it’s important that your products have a consistent weight and shape when working with automated palletizers, it’s equally important that your pallets themselves don’t vary in weight or dimension. Since wood is an organic material that can expand, contract, absorb moisture, and splinter, it doesn’t make an ideal partner for automated palletizers. If you use wood block pallets and are considering (or already use) an inline or robotic palletizer, you may want to think about switching pallet types as well. A durable shipping platform with less variability in weight and dimension can reduce palletizing errors and interruptions.

Plastic pallets are one alternative. They are a uniform, precisely engineered product with set dimensions and weight, allowing automated palletizers to be programmed to a tighter tolerance. Plastic pallets can help you make the most of your supply chain automation, whether that’s a palletizer, a depalletizer, or an Automated Storage and Retrieval System (ASRS).

The iGPS pallet pool offers light weight, engineered plastic pallets that consistently meet GMA specifications. To get started palletizing with a sturdy, uniform shipping platform, give our team a call at 1-800-884-0225, email a specialist at [email protected], or visit our contact page.